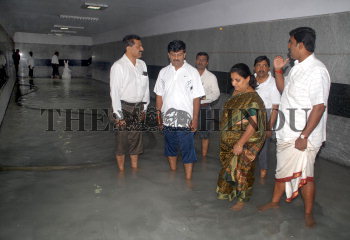 Caption : MYSORE, 16/11/2010: A team of elected representatives and officials of Mysore City Corporation inspecting the water-logged subway on Sayyaji Rao Road in Mysore on November 16, 2010. Photo: M. A. Sriram