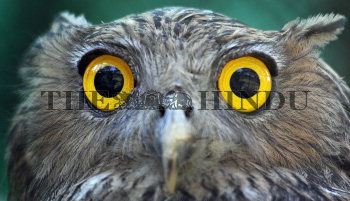 Caption : GUWAHATI?15-11-2010 : (BROWN OWL TRADE) A Brown Fish Owl (Ketupa Zeylonemsis) takes rest in Guwahati zoo on Monday, November 15, 2010. A big wildlife trade has come to light after several Brown owls like this one were rescued from traders in various parts of lower Assam. There is a great demand for this variety of owl mainly in South East Asia. According to the traders, a 3-5 kg Brown Fish Owl is worth rupees three lacs in the international market. Due to the increasing demand, few locals have also started rearing this bird in their villages. Assam wildlife department is doing very little to stop trafficking of this Brown Owl although it is a flourishing business going on for many years now. PHOTO: RITU_RAJ_KONWAR