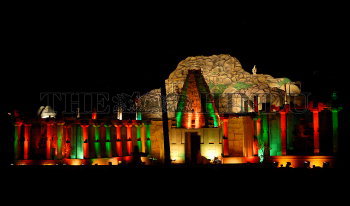 Caption : BANGALORE, 14/11/2010: Sound and light show to commemorate the 500th anniversary celebrations of Sri Krishnadevaraya's Coronation, organised by the Department of Tourism near Freedom Park in Bangalore on November 14, 2010. Photo: G.P. Sampath Kumar