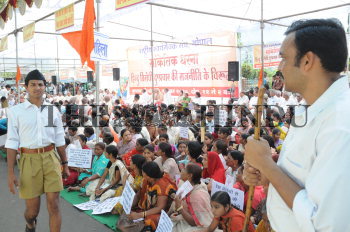 Caption : BHOPAL, 10/11/2010: Rashtriya Swayamsevak Sangh (RSS) activists take part in a nationwide dharna organised by RSS in protest against accusations on the group with terrorism and Ajmer blasts, in Bhopal on November 10, 2010. Photo: A.M. Faruqui