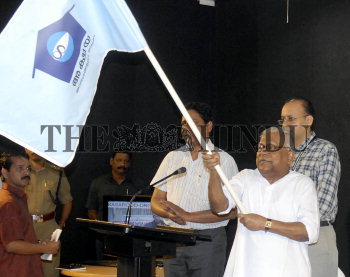 Caption : THIRUVANANTHAPURAM, 09/11/2010: Chief Minister V. S. Achuthanandan flagging off via video-conferencing the 'Akshaya Janasevana Pracharna Yatra', a travelling caravan from the studios of the [email protected] in Thiruvananthapuram on November 09, 2010. The yatra has been set off from the extreme north district of Kasaragod. The Yatra, which will head south towards the State Capital, is being taken in honour of the Akshaya e-literacy model, an information and communication technology (ICT) initiative aimed at bringing the benefits of technology to the entire population of the State. Photo: S. Mahinsha