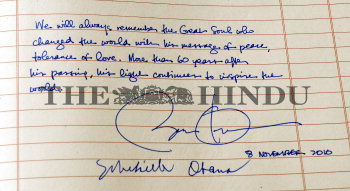 Caption : NEW DELHI, 08/11/2010: The comments written on the visitors book by US President Barack Obama and his wife Michelle Obama after paying homage at the Mahatma Gandhi Samadhi at Rajghat in New Delhi on November 08, 2010. Photo: S. Subramanium