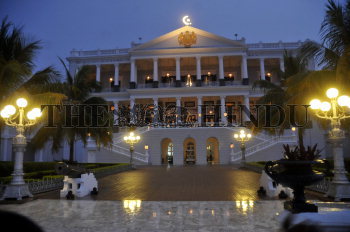 Caption : HYDERABAD, 04/11/2010: A lit Taj Falaknuma Palace presents a regal look, after it was opened for the public in the Old City of Hyderabad on November 04, 2010. The magnificent historic structure is a legacy of the 400-year old rule of the Nizams and is sure to be another jewel in the city crown. Photo: Nagara Gopal