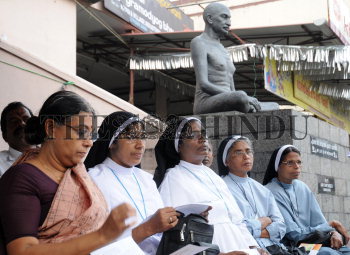 Caption : KOCHI, 04/11/2010: Nuns participating in a fast organised by the National Alliance of People's Movements in Kochi on November 04, 2010 to mark the 10th anniversary of Manipur's Irom Sharmila's fast to get the Armed Forces Special Powers Act scrapped. Photo: H. Vibhu