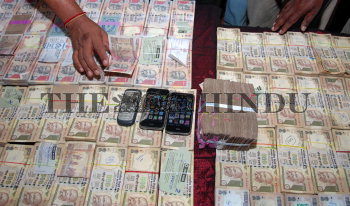 Caption : CHENNAI, 03/11/2010: The ransom money which was recovered from the accused, on display at the Police Commissioner's Office in Chennai on November 03, 2010. Two men who allegedly kidnapped R. Keerthivasan (13) of Anna Nagar while he was returning home from school on November 2 and released him after taking Rs.98.73 lakh in ransom were nabbed by the police. Photo: V. Ganesan