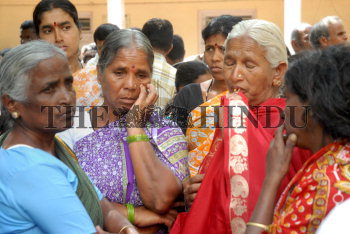 Caption : MYSORE, 03/11/2010: Relatives of convicts of Badanaval case anxiously waiting for the pronouncement of sentence in the infamous Badanaval case at sixth Additional Sessions court in Mysore on November 03, 2010. Justice Malavalli, who on September 28 convicted 20 people accused of brutal murder of three Dalits at Badanaval village of Nanjangud taluk in 1993, had initially posted the case for sentencing to September 30. It was later deferred till November 03rd. Photo: M.A. Sriram