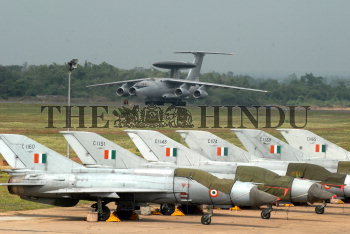 Caption : KOLKATA, 02/11/2010: An Airborne Warning and Control System aircraft, the on-air radar system that was used in an exercise for the first time in India, lands at the Kalaikunda airbase, about 130 km west of Kolkata, on November 02, 2010. Photo: Sushanta Patronobish