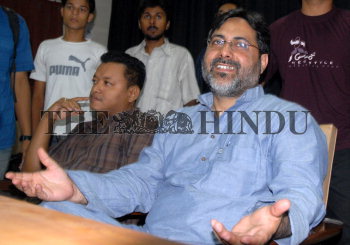 Caption : KOLKATA, 30/10/2010: S.A.R. Geelani, professor of Delhi University who had been named an accused in the 2001 Parliament attack, addressing a seminar on 'Azadi for Kashmir' in Kolkata on October 30, 2010. Photo: Sushanta Patronobish