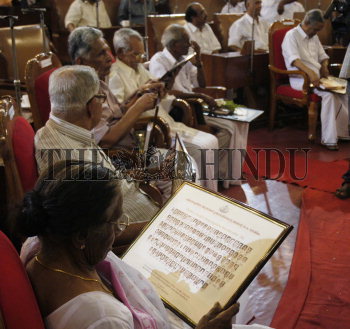 Caption : THIRUVANANTHAPURAM, 05/04/2007: A gallery of the laminated pictures of the members of the first Assembly was presented to those of them who attended the function held in the old Assembly Hall in Thiruvananthapuram on April 05, 2007 to mark the golden jubilee of the first ministry of modern Kerala. Photo: C. Ratheesh Kumar