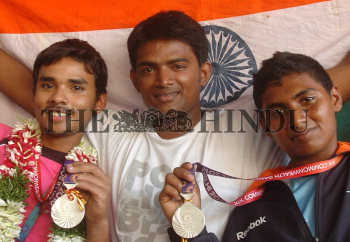 Caption : VIJAYAWADA (AP), 14/10/2010: Indian archers Ritul Chatterjee (left) and Ch. Jignas (right) who were part of the Indian compound team that won the silver medal in archery in the Commonwealth Games 2010 with their coach Ch. Lenin in a felicitation organised in Vijayawada on October 14, 2010. Photo: V. Raju