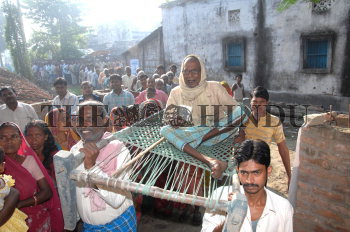 Caption : MADHUBANI, 24/10/2010: An old voter being taken to a polling station in Minapur Assembly constituency of Muzaffarpur district during second phase of Bihar Assembly elections, on October 24, 2010. Photo: Ranjeet Kumar