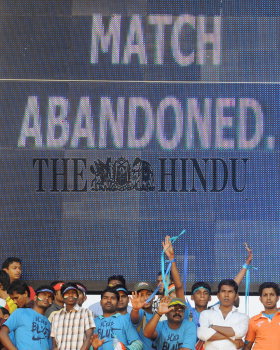 Caption : Kochi, 17/10/10. Despite the threat of rain, there was a decent crowd for the ODI cricket match between India and Australia at the Jawaharlal Nehru Stadium in Kochi on October 17, 2010 which was later abandoned due to rain. Photo: H. Vibhu