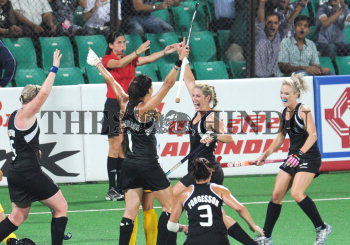 Caption : New Delhi,11/10/2010: New Zealand's Clarissa Eshuis (2R) being greeted by teammates after the first goal against South Africa in the semifinal match during the Commowealth Games at Dhyan Chand National Stadium in New Delhi on October 11, 2010. Photo:R_V_Moorthy