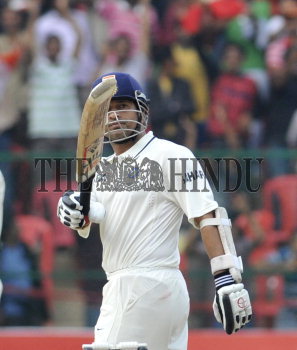 Caption : Bangalore: 10/10/2010. Indian cricketer Sachin Tendulkar celebrates after completing 14,000 runs in Test cricket on the second day of the second cricket Test match of the Airtel series for the Border-Gavaskar Trophy 2010 between India and Australia at the M. Chinnaswamy stadium in Bangalore on October 10, 2010. Photo: K. Bhagya Prakash