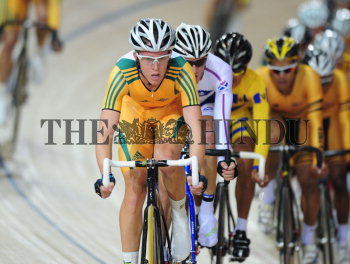 Caption : NEW DELHI, 08.10.2010 : Australia's Cameron Meyer, who won the gold medal in the men's scratch race, in the lead during the Commonwealth Games track cycling competition at the Indira Gandhi Stadium in New Delhi on October 08, 2010. Photo: K. Murali Kumar