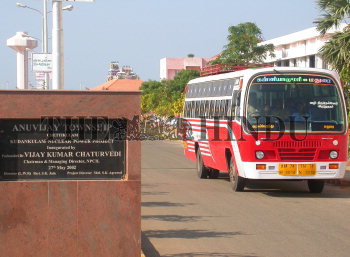 Caption : TIRUNELVELI, 02/04/2007: The Tamilnadu State Transport Corporation bus carrying the employees of Koodankulam Nuclear Power Project leaving for the project site from Anuvijay Township on April 02, 2007, as five of their buses were attacked and damaged by an unidentified armed gang on March 31, 2007. Photo: A. Shaikmohideen