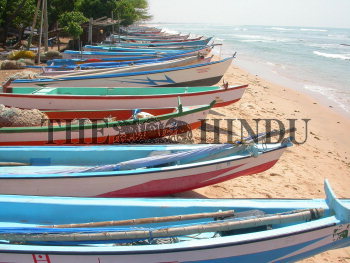 Caption : TIRUNELVELI, 02/04/2007: Fibre glass boats at Koottapuli villlage in Tirunelveli District have been moved to the show after a fisherman in the District struckwork on April 02, 2007 protesting the killing of five Kanyakumari fishermen. Photo: A. Shaikmohideen