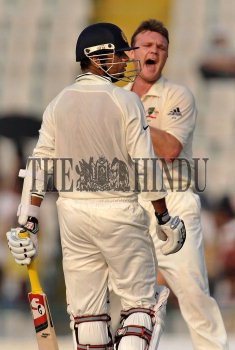 Caption : Mohali : 04/10/2010: Australia's Doug Bollinger celebrates the wicket of Rahul Dravid of India in the second innings on the fourth day of the first cricket Test match of the Airtel series for the Border-Gavaskar Trophy 2010 between India and Australia at the PCA Stadium in Mohali on October 04, 2010. Photo: K.R. Deepak