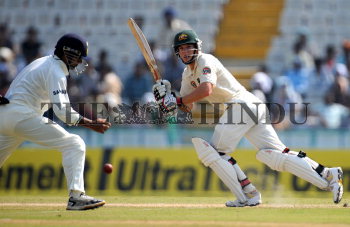 Caption : Mohali : 02/10/2010: Australia's Tim Paine plays a shot past Gautam Gambhir during the second day of the first cricket Test match of the Airtel series for the Border-Gavaskar Trophy 2010 between India and Australia at the PCA Stadium in Mohali on October 02, 2010. Photo: K.R. Deepak