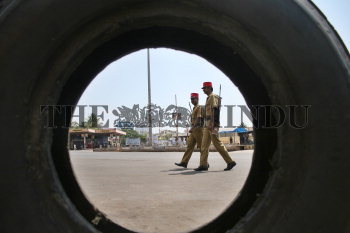 Caption : PUDUCHERRY, 31/03/2007: The Rajiv Gandhi Municipal Bus Terminal in Puducherry wears a deserted look on March 31, 2007, due to the State-sponsored bandh organised in protest against the Supreme Court's verdict staying the law providing for 27 per cent reservation for Other Backward Classes (OBCs) in higher education institutions such as the IITs and IIMs for 2007-08. Photo: T. Singaravelou