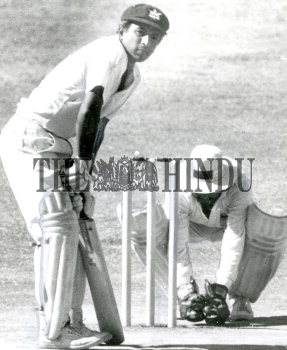 Caption : BANGALORE, 14/03/1982: RANJI TROPHY: Sunil Gavaskar bats left-handed in the Ranji Trophy semi-final match between Bombay and Karnataka, in the second innings on the fourth day on March 13, 1982. Gavaskar's antics (batting left) may have been due to Bombay losing the match on first innings lead while two and half hour's play was lost due to crowd invasion over Karnataka batsman's dismissals. The Bombay captain batted for 66 minutes till the end to avoid innings defeat. Photo: The Hindu Archives