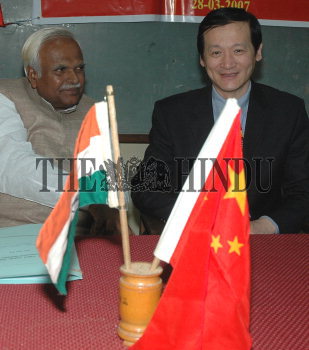 Caption : Bangalore: 27/03/2007: --Karnataka Legislative Assembly Speaker Krishna and Consulate General of People's Republic of China Zhang Weiguo at the Indo-China Relations talk (during the Celebrations of 57th Anniversary of the establishment of Diplpmatic relations between India and China) in Bangalore on March 28, 2007. Photo: G.P. Sampath Kumar