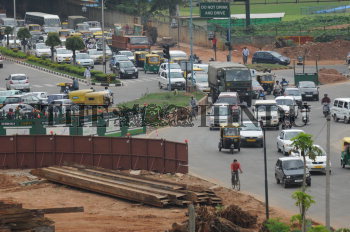 Caption : BANGALORE, 08/09/2010: After the High Court order, work on the underground Metro Rail is picking up pace, in Bangalore on September 08, 2010. Bangalore Metro Rail Corporation (BMRC) and traffic police have drawn alternative routes to check congestion around Minsk SQUARE. With alternative routes around Minsk SQUARE and inside Cubbon park, a deck is being constructed near Minsk SQUARE for vehicles to move while the Metro is being constructed. Photo: K. Murali Kumar