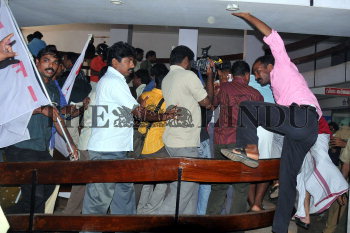 Caption : KOZHIKODE, 06/09/2010: DYFI activists break through the police cordon and barge into the Air India office in Kozhikode on September 06, 2010 to protest against the airline's decision to cancel many services from the State. Photo: S. Ramesh Kurup