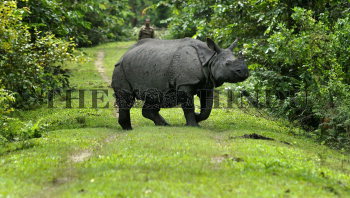 Caption : GUWAHATI, 03/09/2010: An one horned Rhino takes shelter in a highland area as a forest guard watches closely inside the Pobitora Wildlife Sanctuary in Morigaon district of Assam on September 03, 2010. The third wave of flood has submerged more than 60 percent of the wildlife sanctuary and majority of the animals have taken shelter in the highlands. According to the park officials there will a massive shortage of grass land in the sanctuary this year as three consecutive floods have totally destroyed the grass lands. Pobitora has the highest density of one horn Rhino population in the world, presently numbering about 84 according to 2009 census in just 38.8 Sq. km area. Photo: Ritu Raj Konwar