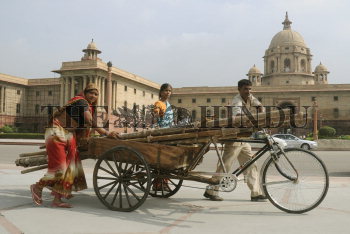 Caption : NEW DELHI, 27/08/2010: Labourers carting construction poles for beautification of the Capital as part of the Commonwealth Games, even as a Group of Ministers on the CWG held a meeting on August 27, 2010. The August 31 deadline for getting ready stadiums and venues has been pushed back. Urban Development Minister S. Jaipal Reddy has blamed the delay on rain. Photo: V.V. Krishnan