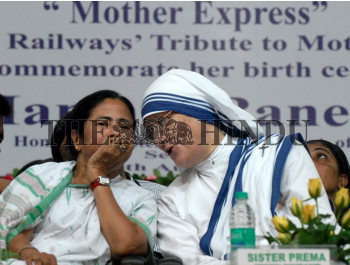 Caption : KOLKATA, 26/08/2010: Union Railway Minister Mamata Banerjee and the Superior-General of Missionaries of Charity, Sister Prema, before the opening of the 'MOTHER Express' for public viewing on the birth centenary of MOTHER Teresa at the Sealdah Station in Kolkata on August 26, 2010. Photo: Sushanta Patronobish