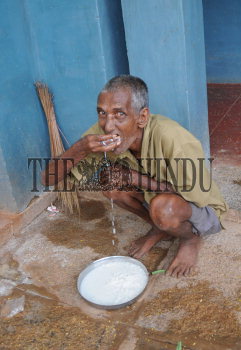 Caption : BANGALORE, 19/08/2010: A number of inmates of Nirashithara Parihara Kendra (Beggars' Rehabilitation Centre) on Magadi Road said they cannot stomach the poor quality food at the centre. 12 inmates of the centre died over a period of two days after they were allegedly left unattended despite being wracked by continuous bouts of vomiting and diarrhoea. They fell ill immediately after they had lunch distributed by a philanthropist on Independence Day. Photo: K. Murali Kumar