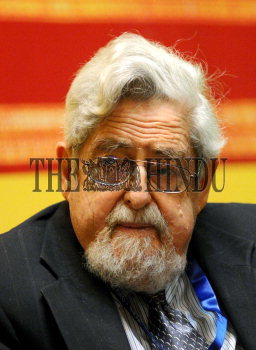 Caption : HYDERABAD,19/08/2010: Louis Nirenberg of Courant Institute of Mathematical Science, NEW YORK UNIVERSITY, honoured with Chern Medal by the President of India, Pratibha Devi Singh Patil at the International Congress of Mathematicians, held in Hyderabad on August 19, 2010 and Louis is the first recipient of this award for his role in the formulation of the modern theory of non-linear elliptic partial differential equation and for mentoring numerous students and post-docs in this area. Photo: Mohammed Yousuf