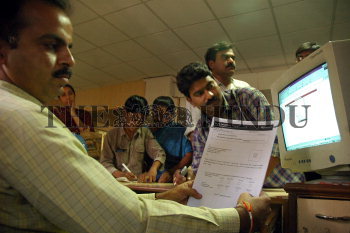 Caption : Dream House Project: Distribution of applications for Rajiv Swagruha Scheme (Rajiv Gruhakalpa phase II) was marked by shortage of forms with many people returning empty-handed. Serpentine queues were witnessed at the e-Sevas counter where the forms were issued in Hyderabad on March 25, 2007. Andhra Pradesh Government has launched the scheme to provide shelter for the middle-class people dwelling in cities and towns in the next two-and-half years. Photo: Mohammed Yousuf