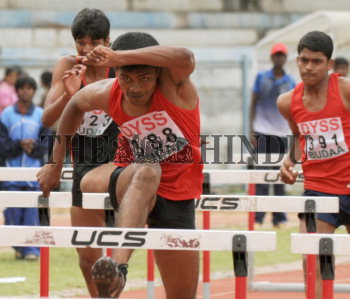 Caption : BANGALORE, 13.08.2010 : F.V. Bangi (388) from Sports School Chandargi, winner in the Under-16 boys' 110m hurdles event, in action on the second day of the 22nd Karnataka State Junior and Senior athletics championship at the Sree Kanteerava Stadium in Bangalore on August 13, 2010. Photo : K. Murali Kumar