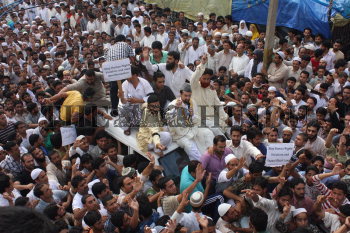 Caption : SRINAGAR, 13/08/2010: Chairman of All Parties Hurriyat Conference Mirwaiz Umar Farooq leads a rally in Srinagar on August 13, 2010. Mirwaiz who was released from house arrest this morning, offered congregational friday prayers at the historic Jama masjid in the old city of Srinagar after six consecutive week. Photo: Nissar Ahmad