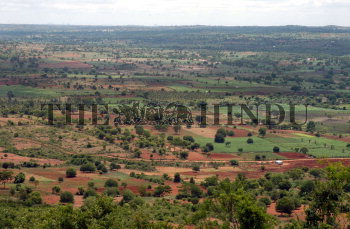 Caption : MYSORE, 12/08/2010: A view of the plains around Chamalapura as seen from Malleshwara Betta. People and activists saved the valley from imminent destruction by the Government keen to establish a coal-fired thermal power plant in the region. Photo: M.A. Sriram 12-08-2010