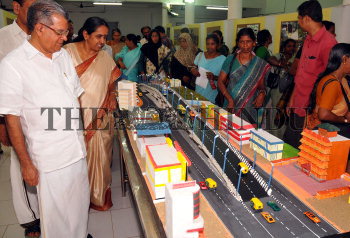 Caption : KOZHIKODE, 10/08/2010: Kozhikode Mayor M. Bhaskaran looking at a replica of the Nayanar Flyover exhibited at an exhibition on 'Kozhikode NAGARAM Deshiya Nilavarathilekku' showcasing the development initiatives in the city in the past five years in Kozhikode on August 10, 2010. The show is being organised by the Corporation at the Kandamkulam Jubilee Hall. Photo: S. Ramesh Kurup