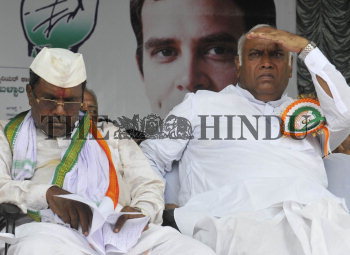 Caption : BELLARY, 09/08/2010: Opposition leader in legislative assembly Siddaramiah and Union Minister for Labour Mallikarjuna Kharge during the public meeting after the PADAYATRA by Congress supporters from Bangalore to Bellary, in Bellary on August 09, 2010. Photo: K. Bhagya Prakash