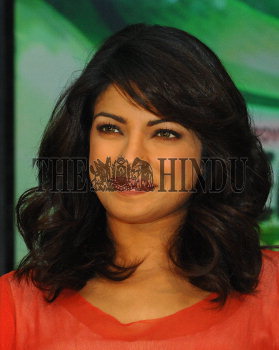 Caption : NEW DELHI, 09/08/2010: Bollywood actress, Priyanka Chopra at a press conference to announce Green Awards, in New Delhi on August 09, 2010. Green Awards is presented by NDTV, in association with Toyota, to encourage, acknowledge and award the champions of the earth, who contributed most towards protecting the environment. Photo: Shanker Chakravarty