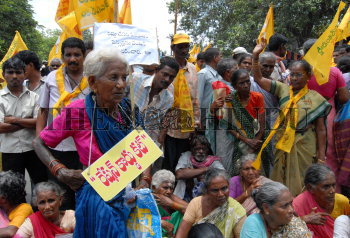 Caption : VISAKHAPATNAM, 09/08/2010: An old woman with a placard hanging around her neck 'ration card cut' during a protest by activists of TDP at the Collectorate in Visakhaptnam on August 09, 2010 demanding REVIVAL of ration cards and oldage pensions. Photo: C. V. Subrahmanyam