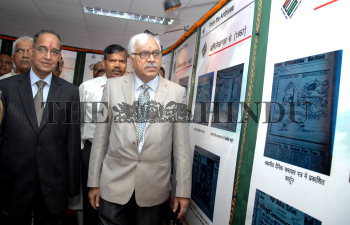 Caption : PATNA, 09/08/2010: Chief Election COMMISSIONER S.Y. Quraishi and Election COMMISSIONER V.S. Sampath look at a photo exhibition on 'Democratic Procedure of Election in India' after inaugurating it, to commemorate the diamond jubilee year of the Election Commission of India at Soochna Bhawan in Patna on August 09, 2010. Photo: Ranjeet Kumar