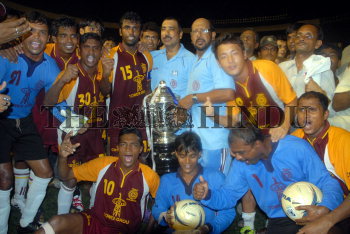 Caption : Kolkata: The victorious Bengal team poses with the Santosh Trophy in Kolkata on August 08, 2010. Bengal beat Punjab 2-1 in the final of the 64th senior National football championship held at the Salt Lake Stadium in Kolkata. Photo: Sushanta Patronobish