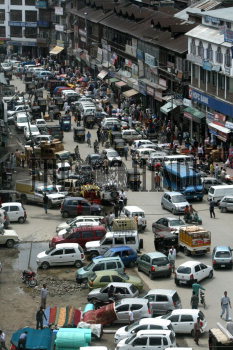 Caption : SRINAGAR, 08/08/2010: Vehicles got stuck in a traffic jam on the Lal Chowk Road as the main markets went abuzz with activity as people went on a shopping spree since the separatists announced a week-long calender of strikes and protests killing in the Valley, in Srinagar on August 08, 2010. Photo: Nissar Ahmad