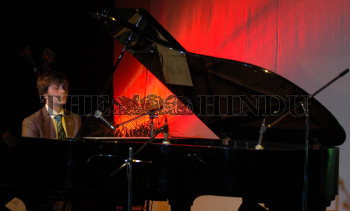 Caption : BANGALORE, 23/03/2007: UNICEF Canada Ambassador Steve Barakatt performing in Bangalore on March 23, 2007. The Lebanese and French rooted Steve Barakatt was born into a musical family and started very early on the classical piano. Young Steve emerged into spotlight when he appeared as a guest soloist for the Quebec Symphony orchestra at 13, and sure enough, became a child prodigy in his hometown of Quebec City. He is on his maiden promotional tour to India for his new vocal project, 'Here I am' (to be released in May this year). Photo: G.P. Sampath Kumar