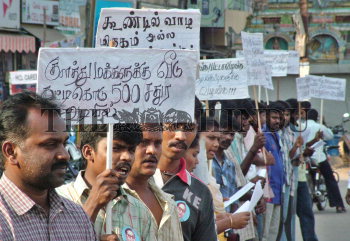 Caption : COIMBATORE, 23/03/2007: Members of the Watchdog Committee on City Development Plan form a human chain at Gandhipuram in the city on March 23, 2007, demanding that people's views should be elicited while implementing the Jawarhalal Nehru National Urban Renewal Mission rather than going only by reports of consultants. Photo: M. Periasamy