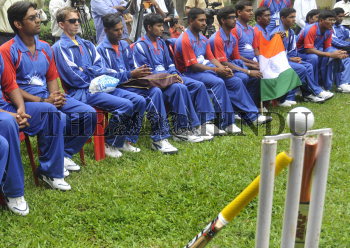 Caption : Bangalore: 06/08/2010. Indian cricket team, before leaving for the World Cup for the visually challenged persons in England, during a farewell given by Sports Minister Gulihatti D. Shekhar at Kanteerava Stadium in Bangalore on August 06, 2010. Photo: K. Bhagya Prakash