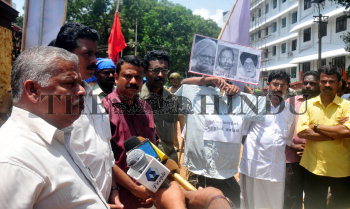 Caption : THIRUVANANTHAPURAM, 05/08/2010: Communist Party of India (Marxist) leader M.V. Jayarajan inaugurating a march taken out by the Democratic Youth Federation of India to the office of the Accountant General in Thiruvananthapuram on August 05, 2010 in protest against the alleged corruption in organising the Commonwealth Games in New Delhi. Photo: S. Gopakumar