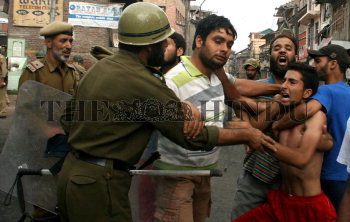 Caption : SRINAGAR, 05/08/2010: Relatives of Ghulam Nabi Badyari scuffle with police personnel on August 05, 2010. He was injured in CRPF firing in Srinagar and he succumbed to injuries later in a hospital. Photo: Nissar Ahmad