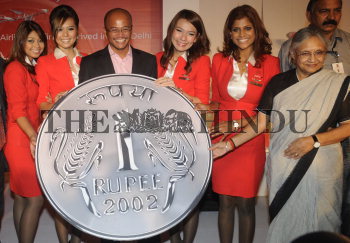 Caption : NEW DELHI, 05/08/2010: Azran Osman-Rani, CEO of Air Asia X alongwith Delhi Chief Minister Sheila Dikshit to celebrate its maiden flight into its second Indian destination as Delhi during a function, Air Asia will be offering promotional fares from as low as 'Rupee One' in New Delhi, on August 05, 2010. Photo: V.V. Krishnan